The Homunculus Mythology and Creation

The Homunculus is one of the more recurring elements seen in the mythos surrounding alchemy meaning little man in Latin. The homunculus is first ... 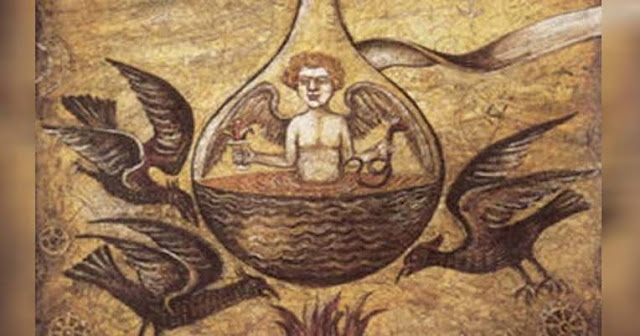 Alchemy the mystical science that laid the foundation down for modern-day chemistry based on the changing of matter from one state into another. Many whimsical tales of its practice describe its goal to be the creation of the philosopher's stone. The elixir of eternal life or even transforming lead into gold. But many believed the true goal of alchemy was actually something much different. The creation of artificial human life. I'll be your host tonight as we take a look at a creature that merges myth with science and philosophy.
The Homunculus is one of the more recurring elements seen in the mythos surrounding alchemy meaning little man in Latin. The homunculus is first described in the writings of Paracelsus in the early 1500s as a miniature human being created in a laboratory typesetting.
Now, this was an interesting era for the field of science as many believed in the idea of preformation, which stated that all living things developed from microscopic counterparts of themselves called animal culés. Which were simply enlarged to normal size during the animal's conception. In this view, it was believed that human sperm cells were in fact tiny humans with their own fully formed bodies and organs.
In 1694 dutch physicist Nicolas Hart slacker invented the simple microscope and with it, he made claims to in fact observe human sperm cells containing miniature humanoids blending much credence to the idea of ant molecules. Rather than allowing this tiny person to gestate inside a mother's womb to develop into a human baby. Some believed that the same conditions could be met with a glass container. And an open flame and such attempts would result not in a human but in a homunculus instead.
There were many proposed ways to go about creating a homunculus some easy enough for anyone to try at home, while others required a bit more effort to pull off. Since a lot of the steps are relatively similar. Here's the basic outline for their conception. 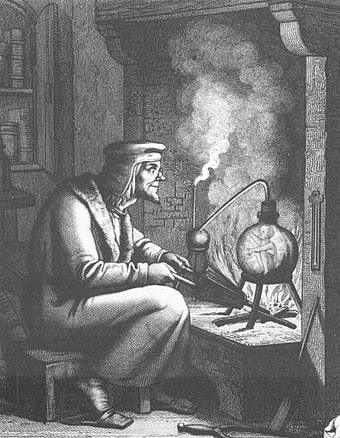 The most common starting ingredient was human sperm cells. These were seen as human animals these would need to be inserted into some sort of incubation area to putrefy over time. Examples include a heated char a chicken egg, the womb of a different animal such as a cow, sheep, horse, or most interestingly a pile of horse manure.
The seed would then need to incubate for a long period of time usually 40 days, all the while being fed a steady supply of food usually fresh human blood. If done correctly then a miniature human figure would emerge from the concoction.
The one condition was that they were never allowed to leave the confines of that which they were created in as the conditions of the outside world would result in their death to this end glass flasks were preferred as they allowed safe observation of their interior without the risk of exposing the creation to the outside world.
There were said to be many different kinds of homunculus on which method you used to make them often gaining special characteristics based on how they were made. The loving nurture of the mother's womb would make a human baby fit to survive in the outside world but for the home in July, their natural abilities were a bit more exotic.
For starters, the homunculus is sometimes said to be born with an inherent knowledge of all things and could therefore be used to gather wisdom or secret information which was often used by their alchemist creators to achieve greater status. Also, some homunculus said to be able to manipulate the phases of the moon or manipulate the weather to bring rain during dry seasons. Some could generate electricity or fire or create live animals such as venomous snakes.
It was also said that some could bush no special supernatural abilities onto their creators. These include the ability to shape-shift into various animals the ability to walk on water or even the ability to communicate with spiritual beings such as ghosts and demons.

Now of course this is all the stuff of ancient myth and legend. Nevertheless, the idea of the monk ulis has managed to survive to the modern-day and I don't just mean in fictional media. If you were to search homunculus on youtube you're likely to stumble across a series of videos by a certain Russian YouTuber who supposedly managed to create his very own homunculus using little more than a common chicken egg.
The creature seen in these videos appears very different than the alleged little man although some have displayed many strange abilities that if true would make them very different from ordinary animals. These videos have become very popular due to their somewhat disturbing nature as there's the vagueness of how real they might be. Many videos have been made analyzing and discussing these in various ways the resounding conclusion is that they were hoaxes.
But you never know some people adamantly defend the video's validity. It may come as a surprise to learn that the homunculus has also been a recurring concept in other scientific fields over the centuries even to the modern-day.
The human brain is regarded by many to be the most complex structure in the universe something we're still struggling to understand fully. Before learning the basics of brains in ancient times it was believed that inside our heads lived a miniature person who was presented with the world as we saw it as a projection on a screen and this person was in charge of controlling our bodies and their functions accordingly.
The only problem with this theory was that if we're controlled by a tiny person in our head? then what controls the tiny person an even smaller one in his head? how many layers down did it go? If it goes on infinitely then why aren't we living inside some giants' heads ourselves?
Clearly, this idea had a lot of holes. More recently the homunculus has made its way into psychology only here it isn't seen as a mythical humanoid but instead as a representation of the human brain. Namely in what ways our senses are mapped out. The size of each body part represents how much of our brains are devoted to. It for example they have incredibly large hands due to the many nerves we have for sensing things by touch using our hands compared to the much fewer nerves found in say the elbow.
The named homunculus is given to this diagram mostly due to the interesting shape and size of the creature it depicts. So it seems the concept of the homunculus has become a timeless one maybe the creation of them really was achieved by ancient alchemists using secret methods that have become lost across the ages. Or maybe the practice is still going on as we speak. Or perhaps the creation of artificial humans is a horizon we're still approaching growing ever closer as science unravels the secrets of chemistry and genetics.

Comments below what is your thinking ?