Bellerophon Greek Mythology: What No One Is Talking About

A valiant youth, a young demi god, who would rise to become one of the greatest heroes in all of greek myths. 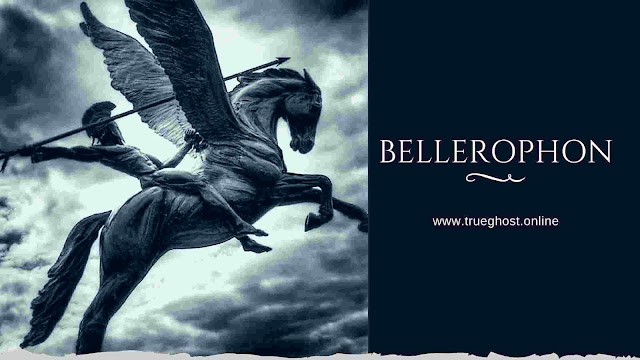 Once upon a time in the land of Corinth, a hero was born. The son of the sea god Poseidon, and the mortal woman, Eurynome. The brother of Deliades. And the grandson of king Sisyphus. His name was bellerophon.
A valiant youth, a young demigod, who would rise to become one of the greatest heroes in all of the greek myths. Glaucus, the king of Corinth, and husband of Eurynome had assumed bellerophon was his son, and raised him as his own, without an inkling of his wife's affair with the sea god. Now, just like Poseidon, the mortal glaucus was a lover of horses.
He was known to make his horses vicious in battle, by feeding them human flesh. Thus, this trait, this fondness of horses, was naturally passed down to bellerophon, from both of his fathers. Right from the days of his childhood, bellerophon so dreamt of riding the legendary flying horse, pegasus. And so, when the time came, this became his first quest, his very first adventure.
He traveled to where pegasus was rumored to roam. There, bellerophon tried to mount pegasus, but the steed shook him off each time. He made efforts to tame it, but it struggled, it kicked, it neighed furiously. He tried to capture it, but the horse constantly eluded him. Still determined to ride pegasus, bellerophon sought the help of polyeidos, the famed seer of Corinth. Polyeidos advised him to sleep in the temple of the goddess Athena, that night.
That this might bring Athena to his aid. And by the help of the goddess, he would gain the trust of the untamed pegasus. Paying heed to the advice, bellerophon went to the sacred temple of Athena and lay there to sleep. While he slept, he had a dream where the goddess fashioned a golden bridle, and set it beside him, saying

sleepest thou, prince of the house of aiolos? come, take this charm for the steed and show it to the tamer, thy father, as thou makest sacrifice to him, of a white bull.

When bellerophon awoke from his slumber. He saw the golden bridle right beside him, and made a sacrifice of a white bull to Athena, and to the earthshaker Poseidon, just as he was told.
Taking the bridle, the young man set back to the abode of pegasus. There he saw the beautiful horse drinking from a well. He watched the horse a while, in admiration. Then slowly approached it, half expecting it to react aggressively, like before.
However, pegasus stood calmly, glanced at the man coming towards it. And continued its drinking. Bellerophon painlessly put the golden bridle on the horse, and it did not kick at him. He mounted the horse, and it did not reject. But instead, flapped its wings, and lifted them both, high up in the air. Bellerophon rode back to his kingdom, to show his people, and the neighboring kingdoms, his wondrous achievement. Impressed by the young hero's deed, king pittheus of troezen, gave his daughter, Aethra, to bellerophon, in marriage.
On a fateful day, before the wedding could take place, bellerophon got into a fight with his brother, deliades. And accidentally killed him. A crime, for which he was banished. And his marriage to Aethra was revoked. The banished prince found refuge in the house of king proteus of Argos, who pardoned him for his crimes. Bellerophon was welcomed and fed. Unbeknownst to him, more trouble was coming his way.
The wife of king proteus, named Anteia, had taken a liking to him. And one day tried to seduce him. But bellerophon was an honorable man. He rejected her advances. Bitter at being rejected, queen Anteia lied to her husband, that bellerophon had tried to force himself on her. Furious, king proteus thought of a way to eliminate bellerophon. He could not kill his guest, as he would incur the wrath of the furies. So, king proteus sent bellerophon to his father-in-law, king iobates of Lycia. Proteus had given the young hero a folded tablet to deliver to king iobates. In that folded tablet, was a concealed message. A message that read thus:

pray remove the bearer from this world: he attempted to violate my wife, your daughter.

Now king iobates did not read the tablet he had been given, immediately. He talked, and laughed, and feasted with bellerophon for 9 whole days, before doing so. When he finally read the tablet's message. King iobates found himself in the same dilema as a son-in-law, proteus. He too, could not kill a guest, for the fear of the furies. King iobates thought of a plan to dispose of bellerophon and came up with one. A mission no ordinary man could accomplish. A mission deemed impossible.
He sent bellerophon to kill the powerful chimera. The chimera was a ferocious fire-breathing monster, which had the head of a lion, the body of a goat, and the tail of a serpent. It was one of the children of Echidna, the mother of monsters. Before the onset of his deadly journey. Bellerophon once again sought the help of the wise seer, polyeidos.
The seer told him to take the winged pegasus along with him. For the steed would prove to be very useful in his time of need. And so, riding through the sky, on the back of pegasus. Bellerophon set out on his journey to caria, to his second quest, to the abode of the chimera. On getting there, the monster was raging, as always, scorching everything in its path, with the heat of its fire. It had terrorized that vicinity for a long time, destroying both men and livestock. From above, bellerophon beheld the creature for the first time, in utter astonishment. What stood below him was huge, it was large, its breath came out in terrible blasts of burning flame, it had razor-sharp fangs and claws, and, he was to kill it. 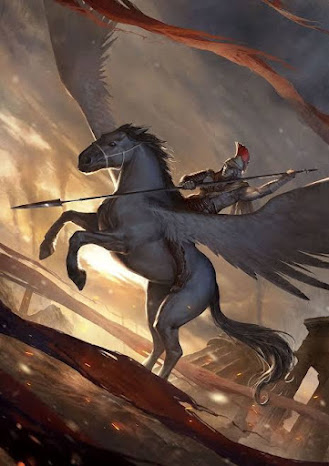 Surely, any man would have fled, but bellerophon did not. For he was brave. With no plan yet in mind, the hero flew towards the beast, perhaps to test its strength. And as soon as the chimera spotted him, it released from its mouth, at this intruder, a blast of flame so strong, that bellerophon could feel the scorching heat of its flame, from the height of his horse.
He quickly swung pegasus to the side, evading the attack. The chimera kept blasting flames, and bellerophon kept evading the attacks. But he was running out of time. The chimera was indeed ferocious, it had covered almost everywhere in flames. And he had to do something quickly or be destroyed by this monster, like others before him. Suddenly, an idea came to him. An idea that could be very deadly, if he failed.
But it was the only way. With the speed and agility of a warrior, bellerophon lept from his horse, directly at the monster, all by himself. With all his strength, with all his might, he thrust his spear, into the monster's gaping mouth, piercing the inside of its throat. For a moment, the chimera didn't seem to be affected.
Then its fire breath, melted the spear made of lead, blocking its air passage. The beast roared loudly, struggling to breathe. Gradually it lowered itself to the ground until it lay still. It had suffocated. The chimera was dead.
What a great moment it was for the hero, a moment that would earn him his place, as one of the greatest of all time. Bellerophon had slain the chimera. Out of the plains, the hero flew, towards the kingdom of Lycia, to king iobates, his quest a success. Oh, what a shock it was to king iobates when he saw bellerophon unharmed. Impossible! how could he have slain a beast that powerful? bellerophon's victory further infuriated king iobates, so he came up with more daunting tasks for the hero. He sent bellerophon against the great warriors of some, and then against the fierce amazons, the children of ares, who fought like men.
But bellerophon came out victorious once again. He flew over them with pegasus, above the reach of arrows and spears, all the while throwing down large boulders on them until they had all been vanquished. Next, the king sent bellerophon against a band of Carian pirates, led by an ogre named cheimarrhus. Bellerophon easily defeated the pirates and came back to meet the even more infuriated king. Having run out of ideas, king iobates sent his elite palace guards to kill bellerophon.
But bellerophon prayed to his father Poseidon, who answered by flooding the plains with water, threatening to drown the entire region. There, king iobates finally realized, that this was no ordinary man, that bellerophon was strongly protected by the gods. His anger vanished, and he immediately regretted his actions. The palace women offered themselves to bellerophon, in defense.
But the honorable hero rejected their offer and prayed to Poseidon to stop the floods. The flood disappeared, and peace was made. Bellerophon married the king's daughter, philonoe, and was given half of the kingdom. On hearing the news, queen anteia, who had falsely accused the hero, killed herself, out of shame. Bellerophon and philology, had two sons, isander and Hippolytus, and two daughters, laodameia and deidameia. He had become very famous, and wealthy.
Sadly, as bellerophon fame continued to grow, so did his arrogance, so did his pride. He deemed himself too great to reside with the mortals. He wanted to go to Olympus, to live with the gods. On a fateful day, bellerophon flew pegasus towards the heavens, to the gates of Olympus.
This was enough to incur the wrath of Zeus. "be gone, fool! away with thy insolence, away to thy doom". Zeus sent a gadfly to sting Pegasus, which caused the horse to throw bellerophon off. Bellerophon fell all the back to the earth, landing heavily on the hard ground. The fall left him broken, crippled, and blind. Bellerophon spent the rest of his life in solitude, wandering in misery, in delusion, till his death. Meanwhile, Pegasus was allowed to enter Olympus, where Zeus used the horse to carry his thunderbolts.
This is the story of bellerophon. The tragic fall of a great hero. The greatest, before the time of Perseus, before the time of Theseus, before the time of Hercules.
****