It was said that the sidhe lived in the mountains of the irish landscape of the burial grounds of the ancestral people known as the tuatha de dannan . We are diving right into the mysterious world of the fae. The Celtic people have many names for these beings, such as the fair folk, sidhe Fae, or Aos si, translated to 'the people of the mounds.'
It was said that the sidhe lived in the mountains of the Irish landscape of the burial grounds of the ancestral people known as the Tuatha de dannan who the fae are said to be descendants of. Accounts of these beings, state that they were described as having supernatural strength and other magical abilities.
They were depicted as fair of hair and skin, and overall very pleasant to behold. Tuatha de dannan is translated to mean 'the people of the mist.' it is speculated that Tuatha de dannan were early invaders, who appeared to the natives of Ireland and folklore states that they have arrived either on the back of dark clouds or that they came directly from the sky.
Others speculate that these beings came from what is thought to have been the lost civilization of Atlantis. In germanic lore, the word elf was used to describe all fae and roughly translates to 'white being' and was thought to be magical and supernatural beings that lived alongside man, just outside the realm of our sight.
In medieval churches and cathedrals throughout the UK, carvings are laying within the architecture of the buildings of what appears to be the face of a man, surrounded by various forms of vegetation. This particularly mysterious being is called the green man, and in pagan, folklore is known to be the guardian of the forest; an ever-present ever-watchful deity of the wild places of the world. It was said also that he perhaps represented a melding of man and nature and would aid the pagans in their agricultural affairs.
He seems out of place in the walls of a Christian house of worship, but it is speculated that the architects and religious leaders of the time incorporated this obviously pagan figure into their houses of worship as a way to make the transmutation of an entire civilization's belief system, an easier transition. 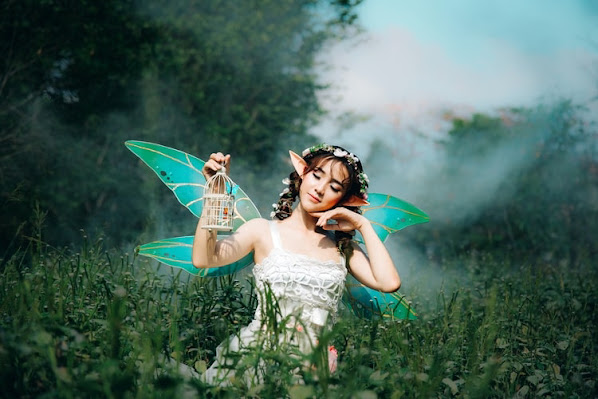 Not much is known about this secretive figure and its origins are not well known. When observed this deity seems to demand a certain respect. He was, after all, the god of the forest, for those who believed in him. There is very little Irish history that is not in some way, linked very closely with mythology and scholars have had a difficult time separating one from the other. The fae culture runs deep in the Celtic tradition and throughout most of the united kingdom. These fantastical stories that are steeped in mystery, come to us in modern times to awaken a sense that the imagination within a culture is part of what makes us all so unique.
What is it about that part of the world that is so saturated with stories of otherworldly beings and sightings of these strange fair folk? perhaps we will never know the answer or perhaps the answer lies within our own power of imagination and being open to the possibility that what is not easily seen or explained does not necessarily deem it impossible to be.

Next time you can expect that we will be journeying further into the world of fae and taking a look at some pagan lore surrounding the fae. We will also be talking about a particular type of celtic fairy and taking a look at inspiration behind the works of one of the greatest fantasy authors of our time.