In the time of the primordials, ancient titans and giants, after the battle between the titans and the gods, the mother earth gaia, was angered by the 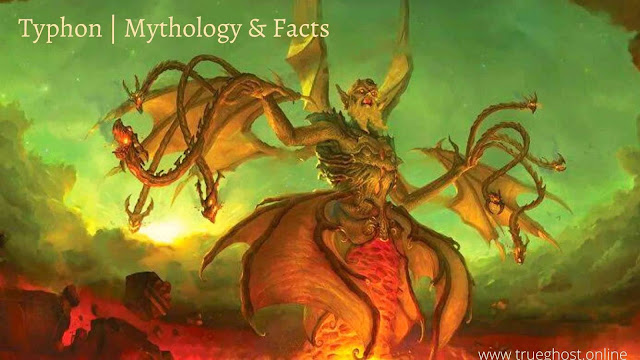 In the time of the primordials, ancient titans and giants, after the battle between the titans and the gods, the mother earth Gaia, was angered by the destruction of her children, the titans, and so, sought to bear another child more powerful than anything in the universe, powerful enough to overthrow the Olympians. Gaia mated with Tartarus, the dark abyss, and from their union came Typhon, the greatest monster of all. An extremely horrid creature, with immeasurable strength.

In a slightly different story version, Typhon was the son of Cronus and hera. After a big quarrel with Zeus, an angry hera visited their father Cronus (whom Zeus had overthrown) and asked for a way to overthrow Zeus. Cronus handed hera two eggs covered in his own semen and told her to bury them, that from those eggs, the one who would overthrow Zeus, would be born. Hera buried the eggs in Cilicia, but before Typhon emerged, hera had reconciled with Zeus and told I'm what she had done.
Whichever the story is, there was never a creature as monstrous as Typhon. Typhon was horrifying, cruel, lawless, and immensely ferocious. On his shoulders, were 100 snakeheads that breathed fire, and made a terrible noise. He never tired nor slept.
So huge was he, that his heads touched the skies. And from the eyes of his 100 heads, fire flashed and burned, as he glared. The mountains trembled at the hisses, the bellows, the roars, and every kind of noise that came from his heads.
He was a great bane to gods and mortals alike. Typhon surpassed all other Gaia's children, both in strength and in size. A poison-spitting viper he was. From the waist above, he had a human form, from below the waist, he had snake coils as legs, and above the shoulders, was an army of venomous snakeheads, with his main head at the center, having tattered hair, an unkempt beard, and fiery eyes. 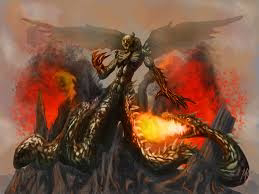 One of his hands reached out to the west and the other hand, to the east. And in place of his fingers, were a hundred dragons' heads. Typhon married a fellow monster, echidna, the mother of monsters, and the two had several monstrous children. They were the ladon, the two-headed Orthrus, the sphinx, the Nemean lion, the three-headed Cerberus, the Linnaean hydra, and the chimera.
When the enormous and powerful Typhon was ready, he set out to do what he was born to do. To overthrow Zeus. Typhon, "began to hurl big fiery rocks", at the gods, he spat poison at them and breathed fire at them. To escape this mad monster, most of the gods transformed into animals and fled to Egypt, except Athena and Zeus, who stayed behind. And hades and Poseidon, who remained in their territories.
Apollo transformed into a hawk, Hermes an ibis, ares a fish, Artemis a cat, Dionysus a goat, Heracles a fawn, Hephaestus an ox, and Leto a mouse and When the warrior goddess Athena urged her father, Zeus, to fight for his children, and all of Olympus, Zeus set out to meet his supposed bane. He and Typhon engaged in an earth-shaking battle, which caused the realm of hades to tremble, and the seas of Poseidon to rage. Even Tartarus shook beneath the feet of the two fighting gods. Who would the victor be?
The king of the gods, or the king of monsters? the two gods struggled and strained, Typhon pouring fire and venom, and Zeus hurling his mighty lightning and thunderbolts. The sky god dealt huge strikes at his opponent, with his thunderbolts, severing many of the monster's snakeheads. After a long time of struggling, Zeus was finally able to restrain Typhon's arms, and fired thunderbolts at the monster, with great might. Typhon fell to earth with a loud crash, burnt, and maimed. Zeus had conquered him. The king of the gods had won.
Typhon met the same fate as his titan brothers, Zeus cast him into Tartarus, and placed a huge mountain, known as mount etna, over him, to make sure he never escapes. It is believed that volcanic eruptions are caused by Typhon, in his efforts to escape.

This is the myth of typhon.