Robert, the doll is a nearly 120-year-old haunted doll in the guise of a young sailor currently residing in a glass case in the fort east martello
A haunted doll, a troubled boy, a creepy attachment. What's behind the haunting of Robert the doll? 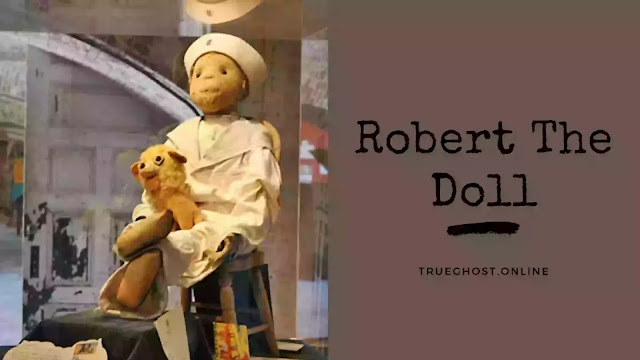 Robert, the doll is a nearly 120-year-old haunted doll in the guise of a young sailor currently residing in a glass case in the fort east martello museum in key west, Florida with a curse that many says follows visitors who take his photograph without permission. From where did this historic, creepy doll originate and why is it supposed to be cursed?

Robert Eugene otto was a four-year-old boy whose family had just moved to key west in 1904 and didn't yet have any friends around his new home. His aunt was on vacation in Germany, found the doll in the window of a store, and shipped it to Robert to serve as a little stand-in friend until he could meet some friends on his own.
Upon receiving the doll, Robert took an instant liking and suddenly stated that from then on, he would be called gene and the doll would be called Robert. The two became absolutely inseparable and gene never really bothered to make any other friends at all, other than the doll.
Gene took the doll everywhere and he talked about Robert as if he were truly alive, creating what many would call an unhealthy relationship. But was it something even more?
It was said that when genes and Robert were alone together, two voices could be heard talking and giggling. Objects moved about the house. And whenever something turned up missing or broken, or when the room would suddenly turn into a violent mess, the gene would blame Robert the doll.
At times, genes claimed Robert actually broke his other toys so that the gene would have no other choice than to play with the doll.
When the aunt that had sent the doll to gene came to visit one day, she witnessed the hold the doll had on her nephew and the strange behavior surrounding Robert. She insisted that the doll was only meant to ever be a temporary playmate, and what was transpiring between genes and Robert had gone too far. She convinced the gene's parents to lock Robert away in the attic. But by the next morning, she was found dead.
It appeared as if she had passed away from natural causes, but the irony was just too much and the gene was sent away to boarding school.
In the years that followed, gene grew up. But he never forgot about his doll, Robert, locked away back home. During this time, neighbors claimed they routinely saw Robert in the top floor window of the house scowling at them, and his legend began to take form.
Gene's father died in 1917 and after gene had married, his mother took ill. So he and his new wife moved into the home to take care of her until she passed away in 1945. Gene, now a well-known artist at this time, was reunited with Robert and the strangeness began again.
The lighting in the upper turret room of the house was better for the gene's painting, so he spent much of his time there with Robert propped up in the window. Observers walking by claimed they saw Robert moving side-to-side in the window while visitors to the house claimed Robert's facial expressions would change depending on the conversation in the room.
There was also a time in which a plumber ran screaming from the house after Robert was said to have scowled at him and giggled. Gene's wife, Anne, despised the strange attachment her husband had with the doll, and Robert became a source of contention between them. After gene died in 1974, Anne locked Robert away in a cedar chest in the attic until years later after her death when Robert was rediscovered and donated to the fort east martello museum where the doll has taken on a new legendary life.

Visitors to the museum, naturally, took photographs of the old, historic doll, creepy as it was, and many began experiencing bizarre mishaps after they left the museum. Some got into car accidents, some lost their jobs, some experienced breakups in their relationships, some experienced all three or other bad luck and many began attributing these misfortunes to the curse of Robert the doll.
Letters began pouring into the museum from all parts of the world, apologizing to the haunted doll for taking his photograph and asking for the curse to be lifted. Many of these letters can also be seen on display with Robert, and now those who wish to take his photograph ask permission first. Of course, the doll hasn't actually been seen responding one way or the other to the requests. So, what really happened between gene otto and Robert the doll, and is the doll really haunted to this day with a powerful curse?
Some believe the doll came to key west haunted. That a spirit attachment came with it from the little shop in Germany and caused the doll to act and behave in strange ways. Others believe a Jamaican housekeeper of the otto family placed a voodoo curse upon the doll and that's why it suddenly became haunted.

My opinion about this Doll

But I think I have a much more plausible idea. We talked about the differences between a poltergeist, the spirit that we knew as a noisy ghost, and poltergeist activity, the telekinetic energy a person will project that creates activity that resembles the activity a poltergeist creates. This is noted quite often in poltergeist activity cases involving adolescent girls as they're just starting to come of age. But is also seen, although perhaps not as often, in people of all ages, including young children.
I believe this is what happened with gene and Robert but in a much more concentrated way. Gene was very young and growing up in an affluent family when they suddenly moved into a new house, and he was without any friends. When that doll came into his life, he was likely not paid attention to very well. So his instantaneous bond with Robert makes complete sense. This doll would become his new favorite playmate.
However, I believe the gene was very special. And like those young pre-teens and teenagers, I believe he was able to, unknowingly, project a high amount of telekinetic energy.
However, since he was so young and he had developed such a strong attachment to Robert the Doll, that telekinetic energy was hyper-focused on the doll. Instead of that energy exerting force at will to anything around the house, making things fly off shelves, tables, or mantels like in other poltergeist activity cases, that energy was solely concentrated into Robert.
So, it wasn't so much that it was a haunted doll as it was gene's telekinetic energy manifesting through the doll that made it seem to come alive.
Being the age that he was, the gene would have no idea that it was he who was actually making Robert do the things it was doing and could only comprehend that the doll was truly walking, talking, and making messes of its own accord. Even when gene moved back into the house as an adult, his attachment to Robert would have been rekindled and the activity would have resumed.
By then, perhaps gene understood his connection to the doll and that it was truly his energy making it move about. Perhaps he used the doll to act out against the plumber, and make Robert contort his face during conversations with visitors if he had feelings about the topic and he didn't want those in the conversation to see on his own face.
But gene passed away in 1974, so how is it now that Robert the doll is haunted and seemingly cursed? doesn't that mean there was a spirit attached to the doll all along and it wasn't really gene?
No, I think it's still gene. I think after he passed away, gene took that bond with Robert into the afterlife and is still there with him to this day. While I don't necessarily believe gene is cursing people, I believe that if Robert the doll is haunted today, that it does now have a spirit attachment and that spirit attachment is gene otto, the person who was performing the hauntings all along.
So, if you go visit Robert the doll at the fort east martello museum in key west, go ahead and ask to take his picture if you like. But also, say hello to gene otto as well. I'm pretty sure he's still there with Robert.