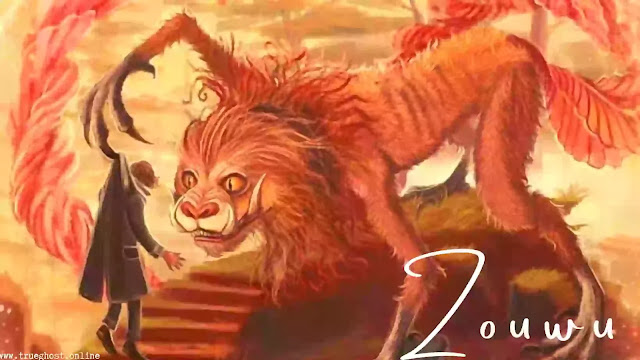 In the land of the lin clan in china, there is a rare beast as large as a tiger, ﬁve-colored, and with a tail longer than its body. It is called zouwu.
When riding this creature, it is said that it can speedily travel 1,000 miles a day. Not only is the zouwu incredibly fast, but it can also be truly dangerous as well when provoked. In legends, the zouwu is described as a "righteous", noble animal, which only appears during the rule of a benevolent and sincere monarch.
It is said to be as fierce-looking as a tiger, but gentle, protective of other animals, and strictly vegetarian.

The creature appears in the 2018 fantasy film, fantastic beasts: the crimes of Grindel wald, where a wizard named newt, encounters an angry zouwu after it escapes from the circus. The young wizard newt can calm it down and rehabilitate it as a part of his magical menagerie of creatures. Now, let's delve deeper into the legends hardly anyone knows. harry potter characters zouwu.

The stories of the creature, zouwu, told to Chinese natives, recorded in Chinese books and ancient history. Many of the descriptions we see today tell that the zouwu is as a white tiger with black spots, and looks like a tiger too.
But the real legends? the real legends tell that the zouwu looks like a giant white panda and nothing like a tiger. In the long history of china, there have been many interesting and legendary records about the giant panda, popularly known as the zouwu.
As the knowledge of the giant panda spread throughout and beyond china, it began to be known by various other regional names, such as pi Xiu, mo, zouwu, White bear, flowery-bear, bamboo-bear, and iron-eating animal.
Chinese records claim that, as early as 4000 years ago, the leader of a tribe, called Huang di, used tamed wild animals to defeat other tribes. Among these animals, there were tigers, leopards, bears, and giant pandas (or more popularly, the zouwu).
The skin of the giant panda was a tallage of a rarity for the emperor. The giant panda was considered an animal that was brave and mighty as tigers and leopards. For that reason, ancient warriors were compared to giant pandas, whose ancient name - pee Xiu, was used to symbolize victory in all wars.
According to records, the giant panda has white and black fur, looks like beer, and is found in the ancient yandao county of qiong lai mountain, (which is the present Rong Jing county of si Chuan province).
Giant pandas were named iron-eating animals because it was said that they eat metals. In the west jin dynasty (about 1700 years ago), the giant panda was termed, zouwu, the name which has become popular recently.
The giant panda was given the title, zouwu, because it eats bamboo and metals only, and does not hurt other animals. So it was seen as an "animal of justice', an animal of peace and friendliness.
When two forces meet in a fierce battle, if one part shows a flag marked "zouwu," the battle will stop, for according to ancient principles of war, the flag marked "zouwu" means peace and friendship, and the battle should stop.
There was a tale of how the empress wuze tian, sent a couple of white bears (or giant pandas) and 70 pieces of panda fur, to emperor tian wu of japan, as a sign of peace.
There was another tale when a certain great poet of the Tang dynasty, was resting in a quiet residence, he felt cold and had a headache because of the chilly wind. Someone then gave him a screen on which a giant panda was painted. The screen brought about a magic effect to drive out his illness. Loving it very much, the poet wrote a poem, ode to the "pi Xiu", on the screen. By saying that giant pandas need a peaceful environment for survival, the poet expresses his concern about the misfortunes and famines brought to the common people by wars.
The ancient Chinese pharmacists recommended that beddings made of panda fur can prevent coldness and wetness, as well as pestilence and vice. While the oil of panda can penetrate the skin to cure tubers, and its urine, drunk together with water, can dissolve metal things eaten by mistake.
This is the story of the creature, "zouwu", the giant panda, which, from ancient times, has always been a mystical, legendary, and rare animal. harry potter characters. legend of zouwu. Chinese mythology.
***
# zouwu chinese mythology, zouwu mythology, zouwu plush, zouwu toy, zouwu funko pop, zouwu tattoo, zouwu pronunciation, zouwu drawing, zouwu beast, zouwu harry potter, zouwu cat harry potter, zouwu gif