Top 10 Most Haunted Houses in America

Disembodied eyes in the night, birds with four wings, and horribly brutal murders. What do all of these things have in common? ..... 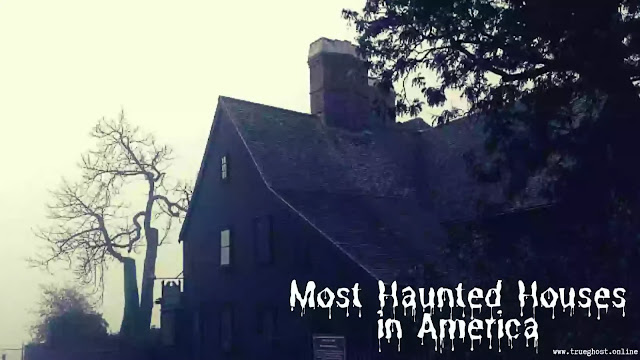 Disembodied eyes in the night, birds with four wings, and horribly brutal murders. What do all of these things have in common? They're all stories connected with properties that claim to be home to restless spirits across the heartland. Today we talk about the most terrifying real haunted houses in America.

Biltmore in Asheville, North Carolina. George Washington Vanderbilt used part of his vast fortune to construct a palatial mansion in the 1800s named Biltmore. The massive compound ground and the building itself serve as a monument to his opulence and wealth. After Vanderbilt died in 1914, strange things began happening on the grounds of Biltmore.
People said they heard voices, saw objects move, and witnessed strange shadows. But that was no deterrent to Vanderbilt's children, who decided they would turn the estate into a tourist attraction, and that's when everything evolved.
Many guests have witnessed otherworldly things including Vanderbilt's deceased wife calling out his name, ominous inscriptions found on mirrors, and strange stains on the walls. No one knows exactly what these things mean or why they manifest, but if anything, they've only helped to grow the dark legend of Biltmore.

Winchester House in San Jose, California. The house that once belonged to the heiress of the Winchester rifle empire is said to be haunted by the ghosts of the legions of people The? Eponymous rifle kills.
However, the truth behind this nightmarish home is even worse. Sarah Winchester added room after room to the house driven by a madness no one truly understands. She commissioned stairways that went nowhere, hallways that turned into mazes, sloping floors, and narrow secret rooms that were inhumanly shallow they were sure to induce claustrophobia. Sarah Winchester would even go as far as to hire separate workmen to build these projects for her. She never told them about each other, taking on all the projects in secret.
It's said that her ghost still wanders through the nearly 2,000 doors, 47 fireplaces, 40 staircases, 13 bathrooms, and nine kitchens of the Winchester house.

Begich Towers in Whittier, Alaska. Alaska is a place of stark beauty and simple horrors. People go missing and die in the cold unforgiving terrain constantly, the only defense against which is just to live close to other people, which can be hard in the snow-covered states. Home to a church, public utilities, and multiple stores, Begich Towers offers just about anything a person could want including visitors from the afterlife.
Many residents have told tales of witnessing old men who walked through walls, young girls who disappear when spoken to, and a man who whistles and wanders around the complex in the wee hours of the morning.
The main paranormal activity that residents have witnessed throughout the years though was the sound of footsteps. Even when everyone in the building was completely asleep, claims of disembodied footsteps echoing throughout the building have been put forth by large swaths of the occupants.

What's the ultimate meaning of this?

That's not quite clear. There doesn't seem to be an explicitly tragic backstory for Begich Towers, just the simple fact that when you live in a harsh environment like Alaska, bad things are bound to happen.

Whaley House Museum in San Diego, California. San Diego may seem like a fun party city, but it's got some dark and disturbing history. In 1852, James Yankees Jim Robinson was hung until dead after being convicted of grand larceny.
A few short years later, Thomas and Anna Whaley built a house on the spot where he was killed. Can you guess what happened next? Yankee Jim's ghost stalked the hallways at this newly constructed home. The Whaleys claimed to be able to hear plodding footsteps, mysterious noises, and wailing at all hours of the night.
Yankee Jim isn't the only person to lurk inside the Whaley house though. In a horrific turn of events, both Mr. and Mrs. Whaley, a mysterious young girl, and the family hunting dog have all been known to skulk through the remaining structure.
Today, the house has been converted into a full-blown museum dedicated to the paranormal events that have transpired within it. House of Death in New York City, New York. Living in Greenwich Village is a fairly expensive order at this point. However, the brownstone on West 10th Street known as the House of Death might be a little cheaper for the adventurous individual.
Why you ask. Well, there's the simple fact that over 22 people mysteriously died within its walls, the most disturbing of which was a six-year-old girl who was beaten to death by her adoptive father. To this day, sightings of all 22 different victims have been said to be seen regularly.

Lizzie Borden Bed and Breakfast in Fall River, Massachusetts. Sometimes even when you're acquitted, a crime is so heinous it follows you for the rest of your life. This is what happened with Lizzie Borden.
Her mother and father were found dead in 1892. They had been chopped to pieces by an ax. The only possible suspect the police could come to was Lizzie. She was tried for her crimes, found innocent, and acquitted. However, she never fully recovered from the incident. It's said her guilt-stricken ghost still lurks the halls of the Borden Bed and Breakfast, which has now turned into a museum and a bed and breakfast if you're brave enough to spend the night.

The Sallie House in Atchison, Kansas. Sometimes things that happen on the earthly plane are so traumatic and so dark that they puncture the membrane of existence. This allows spirits from the great beyond to enter our world, which is exactly what it seems like happened at the Sallie House.
In the early 1990s, Deborah and Tony Pickman claimed they encountered flashing lights, visions of a small girl, and moving objects in their home. They heard unexplained voices, saw fingernail scratches on the floors, and even discovered burns on their bodies. The story behind just exactly who or what this untethered spirit was remains something of a mystery.
However, the previous occupants before the Pickman's were named Bobby and Colleen Humbert. Their daughter Heather had an imaginary friend named Sally. People who have investigated the story claim that Sally was not actually a small girl or an imaginary friend but a literal demon who was using Heather as a vessel to this world. It's said that on moonlit nights, viewers have a good chance of coming face to face with Sally regardless of what she truly is.

Villisca Axe Murder House in Villisca, Iowa. Small towns have specific energy to them that can be scary just by their ambiance. Villisca, Iowa, is one of those towns. Part of that aura comes from the simple fact that in 1912 an entire family was brutally murdered with an ax. Four children, two young friends, and parents were killed for seemingly no reason.
A few suspects were questioned by local authorities, but no arrests or charges were ever brought forth. It's said that the entire family still walks the grounds of the house. Today, brave paranormal adventurers can even pay a fee to spend the night in the Villisca Axe Murder House for the fleeting chance at witnessing the ghostly sightings themselves.

Bell Witch Cave in Adams, Tennessee. Have you ever seen an animal that didn't quite move correctly? Maybe its gait was off or it seemed to have a few too many legs. Well, John Bell's family was beset upon by strange nocturnal creatures, virtually from the start of their purchasing of a home along Tennessee's Red River.
They claimed to see a dog with a rabbit's head, strange four-winged birds, and a myriad of other bizarre creatures. They also heard noises and voices during the night. Bell eventually attempted to confront what was family-nicknamed The Entity and purportedly discovered that it was, in fact, his former neighbor, who had died but was now back from beyond the afterlife due to a perceived social slight.

Franklin Castle in Cleveland, Ohio. It takes a lot for a place to be considered the most haunted house in Ohio, but Franklin Castle has earned the moniker fully. The castle was originally built in the 1800s by Hannes Tiedemann. After the castle's completion, a string of murders happened on the premises, leading to a widespread understanding that Tiedemann was a vile and evil person.
Tiedemann was responsible in the minds of the local townsfolk for the deaths of his wife, mother, three children, and his mistress. To make things even stranger, after Tiedemann left the grounds, the German Socialist Party took up residence there.
It said that the ghosts of the original Tiedemann family, Nazi spies, and even American citizens who just found out too much about the Germans' plans, have all been seen on the grounds returning from the grave.